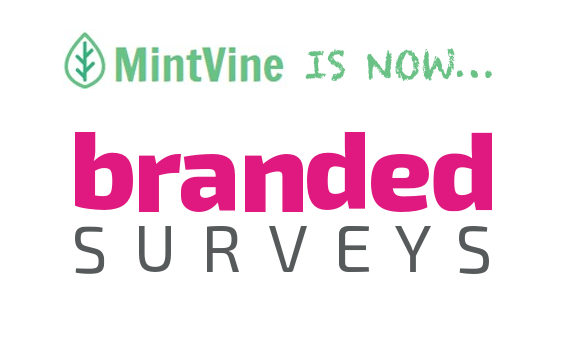 Mintvine has rebranded to Branded Surveys. Although the name and look of the website has changed, the service itself remains similar. Keep reading to decide if Branded Surveys is a good opportunity for you.

Mintvine (Branded Surveys) used to be an unfamiliar name, but now it’s becoming one of the fastest growing survey sites out there. Launched in 2012, they have acquired over a million members since. But is this underdog a real contender? In this review we give you our opinion on surveys.gobranded.com as we take a closer look at this new and exciting site.

What Is Mintvine (Branded Surveys)?

Certainly no eye-sore, Mintvine’s (Branded Surveys’) visual representation is spotless. Bright and colorful, their information is open and explanatory. On their homepage, they have a quick promotional video that gives new users the scoop on what their site’s all about.

Regarding the site’s history, there isn’t much we could find on their page. Through careful research we discovered that they’re run by Branded Research Inc. with bases scattered worldwide. A rather famous marketing research firm, it’s also a member of the ESOMAR (The European Society for Opinion and Market Research). Knowing that a potential survey site is run by a legit company is reassuring. If you want to know more about Branded Research Inc., check out their website.

Mintvine (Branded Surveys) is a trusted Facebook partner and has accreditation with the BBB (Better Business Bureau).

To activate your account, complete the sign-up form before confirming your registration via email. Just for the act of registering, the site rewards you 200 points. If you want to gain more easy points after you sign up, take advantage of the visible profile surveys. A sizable 510 points are added to your account once you complete all profile surveys.

If you want to get most out of your surveys, we recommend that you stay honest while signing up. If not, Mintvine (Branded Surveys) is unable to match you with the correct surveys and you’ll be stuck with surveys you don’t qualify for.

When 1000 points equals a mere $10, it takes time to rack up cash. Mintvine (Branded Surveys) moderates this dilemma by providing its users with multiple ways to make money.

On Mintvine (Branded Surveys) you’ll receive a notification of matched surveys as soon as they’re available. Act quickly, though, because surveys fill up fast. If unavailable or disqualified, you’re gifted with five points to compensate for the struggle, sometimes more depending on the survey. If you don’t match for a survey, they use your answers  to find you better matches in the future. This helps heighten your chances of earning more points and ultimately more money.

Most online surveys take between 10-20 minutes to complete, but expect for some to go a few minutes longer than advertised.

Once you reach 1000 points, you’re given the choice to either transfer funds into your PayPal account or redeem them as a gift card that’s sent straight to your email. Redemptions take approximately 48 hours to validate, which is a considerable amount of time in our opinion.

Also make sure to take part in Mintvine’s new Mint Roll Surveys.  Mint Roll is a new survey concept that’s formed around your opinions and behavior. No more than 7 minutes needed for each, completing every survey can earn you 200 points. When they become available you can reach them in the account section after you login.

What makes Mintvine (Branded Surveys) special is that they provide their users with ways other than surveys to make money. From referral systems, to earning rewards for shopping locally and taking part in focus groups, the possibilities are endless.

Looking for something new to do this weekend? Local Deals offer immense deals at all the best loved local hubs. Instead of paying full price, Mintvine (Branded Surveys) marks down prices and gifts you with additional points upon going. To sum up, they’re rewarding you to be a part of your local community.

Members can earn additional points with the MVP Referral Program. For each friend you direct to their site, you get 15% of their points earned using offers and surveys.

If friend referrals aren’t something you’d be interested in, try taking part in a focus group instead! Focus groups are sort of like paid surveys because you get paid for answering a lot of questions, except it’s more of a discussion. With the occasional invite, Mintvine’s (Branded Surveys’) focus groups pay $25 to $50 an hour.

Mintvine (Branded Surveys) is predominantly a reputable site, but there’s a few complaints concerning its surveys and credits. Taking the number one spot on the grievance list was that there weren’t enough surveys. There aren’t as many surveys on Mintvine (Branded Surveys) compared to other sites, but this is because they try to provide users with only qualified surveys.

Demurrals voice that when the surveys did come in, they arrived all at once in their inbox, making it appear spammy. After completing surveys, sometimes the credits don’t appear right away either. This can be frustrating when you’re in need of quick cash.

When it comes to privacy, Mintvine (Branded Surveys) is pretty sound. There’s no stress while signing up. They ask for your country, age, phone number and zip code. Just the basics and nothing more.

Having to provide a phone number struck a chord with some users who heatedly voiced their concerns in the MintForum (the forum has since been removed). Despite the harsh commentating, administrators provided an excellent reason for this new change in their registration policy. Providing a phone number is another account verification method that will protect members’ accounts. By verifying your phone number, they can also allow more than one member per household to use the account. Members only need to confirm their phone number one time, after that you are free to use the site at its entirety.

Unlike other survey sites, Mintvine (Branded Surveys) will never sell your information to third-party sites. You can trust that your information will be kept safe within their heavily protected databases.

From the information we’ve gathered for this review, we can confidently say that Mintvine (Branded Surveys) is totally legit. Completely free to join, it’s a great way to earn some extra cash.

The positives outweigh the negatives with this site because there are so many opportunities provided that benefit you. From their MVP Referral Program, to local deals or their legit paid surveys, you’ll never be bored with this site.

If you’re looking for other great sites like Mintvine (Branded Surveys), we recommend Swagbucks. Rated number one on our site, it’s a fun and legitimate site that gives you the opportunity to earn big bucks. Click here to sign up now!