Pinecone Research Review – The Details And The Truth

One of the newest players in the quickly saturating paid survey market is Pinecone Research.

It has quickly established itself as a trusted and reliable source of market research surveys both for companies doing business with the panel as well as members who actively participate in its various surveys. Pinecone Research has a distinct emphasis on product and consumption research over other websites and limits the number of available survey categories in order to remain more focused.

Pinecone Research has a strict privacy and confidentiality policy. All members’ personal and household information is aggregated and analyzed as a whole.

Third-party partners can only receive the full results of their submitted surveys. The panel guarantees that members will not be required to purchase anything from companies.

It is unique among other online survey panels in that membership is by invitation-only (either through other current members or through referral websites like www.getpaidsurveys.com or www.surveypolice.com).

Some of the key features of Pinecone Research include: Pros – The Pros Of Pinecone Research

Ranked #2 on www.surveypolice.com’s listing of the Top 213 online survey panels. It has an overall rating of 85 out of 100 based on 270 user reviews and has over four stars out of a possible five.

Ranked #10 on www.getpaidsurveys.com’s list of the Top 24 online survey panels. It has a rating of 4.6 out of 5 from 5 reviews.

Each survey pays a relatively high $3.

This is in contrast to many other survey panel websites that usually pay in ranges starting from $2 or less. Additionally, the 15-30 minutes required to complete each survey though nothing exceptional, translates to greater rewards per survey taken compared to other panels.

Another plus point is the higher-than-average quality of Pinecone Research’s research surveys compared to other similar websites.

In fact, it is not unusual for members to earn $12-15 more even more just by investing in a few monthly on Pinecone Research’s paid surveys and product tests.

There is no minimum redemption rate.

This means, that right after your very first completed survey, you can cash out straight away.

However, ever since Spring 2013, Pinecone Research has made it harder for members to withdraw their earnings due to a change in their reward system.

Previously, you could cash out the very next day after a completed survey whereas now it takes at least double the time to convert your “points” into cash and then withdraw.

Nonetheless, the site’s payment processing times are still among the fast of all the popular online survey panels.

After filling up the voluntary “household surveys” requested by Pinecone Research, the panel uses the responses to assign appropriate surveys to members – resulting in the elimination of disqualification and therefore precluding any wasted time by members who fruitlessly fill up surveys in other panels only to be informed halfway that they have been “screened out.”

This both saves time for members as well as improves their chances of successfully completing more surveys in a shorter amount of time.

Over the years, the weekly offered surveys have increased in quantity. A few years back, Pinecone Research would only send around 1-2 surveys per month.

However, nowadays, the frequency has increased to around 3-5 surveys monthly and sometimes even more – depending on client requirements.

Additionally, quite a number of users have commented on how PR’s surveys are fresh and interesting, not monotonous and often involve research on brand new products and services.

The panel’s product tests offer higher rewards as compared to normal surveys (around $6 per test).

The usual components of such tests include one survey to qualify for the test, followed by the actual product tests (product trials) and culminating in a final survey to describe the product experience after consumption.

Members not only benefit by earning money from partaking in the test but also from trialing and using the specific product. 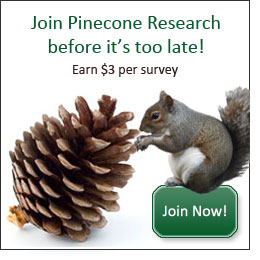 Cons – The Cons Of Pinecone Research

Ever since their crediting and payment system was changed in early 2013, a number of users have expressed dissatisfaction at the move.

Instead of getting paid in dollars the very next day after completing a survey, users are now rewarded in points and must redeem them for cash.

This means that instead of the previous one day waiting period to cash out, users must now wait an extra day or two to convert their credits into cash and then get their balances updated.

This translates into double the waiting period before you can actually receive cash.

Because most surveys are only released through emails, the quantity of available surveys is much less than other websites.

Additionally, their website interface is not as regularly updated or feature-full compared to similar panels.

The website is not very interactive or visually attractive as compared to other panels – both in terms of features as well as overall template design. One user described it as “dated.”

(if you want to use a site that has plenty of surveys and an excellent interface, check out MySurvey)

Membership to Pinecone Research is not always available. You can only join the panel either through the referral of an existing member or via another partner website – like surveypolice or getpaidsurveys.

Additionally, at times during the year (usually when the website has a certain shortage of available surveys to distribute) it will not take in new members at all.

Here’s a short video detailing some of the ins and outs of Pinecone Research:

PineCone Research has consistently been mentioned by a number of users as a very reliable, trustworthy and reputable paid research panel across the many survey review websites, forums and message boards.

Many users have showered the website with such superlatives like “amazing,” “excellent,” “great,” a number of members going so far as to claim that it’s “the best” panel there is.

It’s relatively fast payment processing, high rates per completed survey and efficient qualification and emailing system ensures that Pinecone Research is at the top of the online panel heap when it comes to overall quality.

Though there have been reports of recent delays in payment, the limited number of available surveys and the outdated website interface, Pinecone Research’s pros comfortably surpass its faults.

Its online ratings further support PR’s solid position – being ranked an esteemed #2 on Survey Police’s list of 213 online panels as well as #10 on Get Paid Survey’s list of the top 24 paid survey websites.

The final judgment on PineCone Research is that, it is indeed one of the great paid survey panels out there.

Its high payments per survey, relatively quick payouts, smart qualification and emailing system and rewarding product tests have given it a solid reputation in the paid survey market.

With high ratings on the major review sites, the panel is indeed one of the finest there is.

The best suggestion would be, to utilize Pinecone Research in tandem with some other good panels like Swagbucks and MySurvey in order to earn more income on a weekly and monthly basis owing to the relative dearth in the allotment of surveys available on PR’s monthly system.