Tellwut Review – The Real Deal Or Just Another Scam? 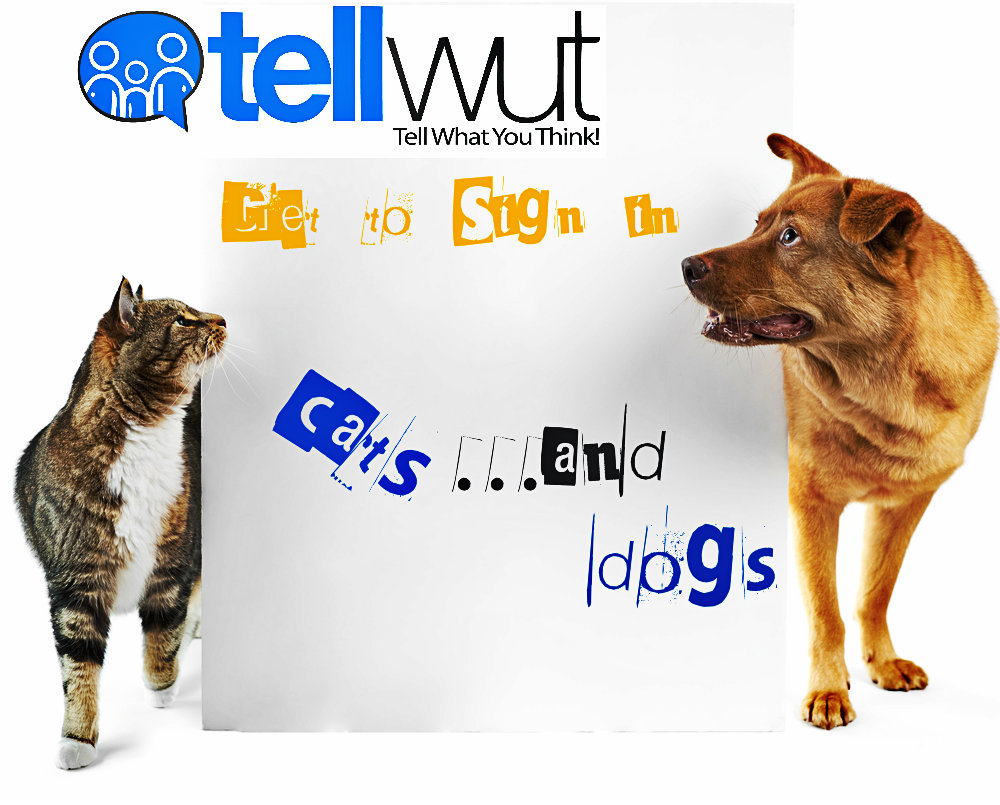 Tellwut (short for “Tell us what you think!”) is an online research and survey panel based out of Toronto, Ontario, Canada.

It is owned by the Tellwut Corporation. As of June 2017, the panel has been listed as #3 out of 172 survey sites from the Approved Panel List on SurveyPolice. Its parent company even has an A+ accreditation from the BBB (Better Business Bureau). They are reviewed under incentives Program for the Toronto area. 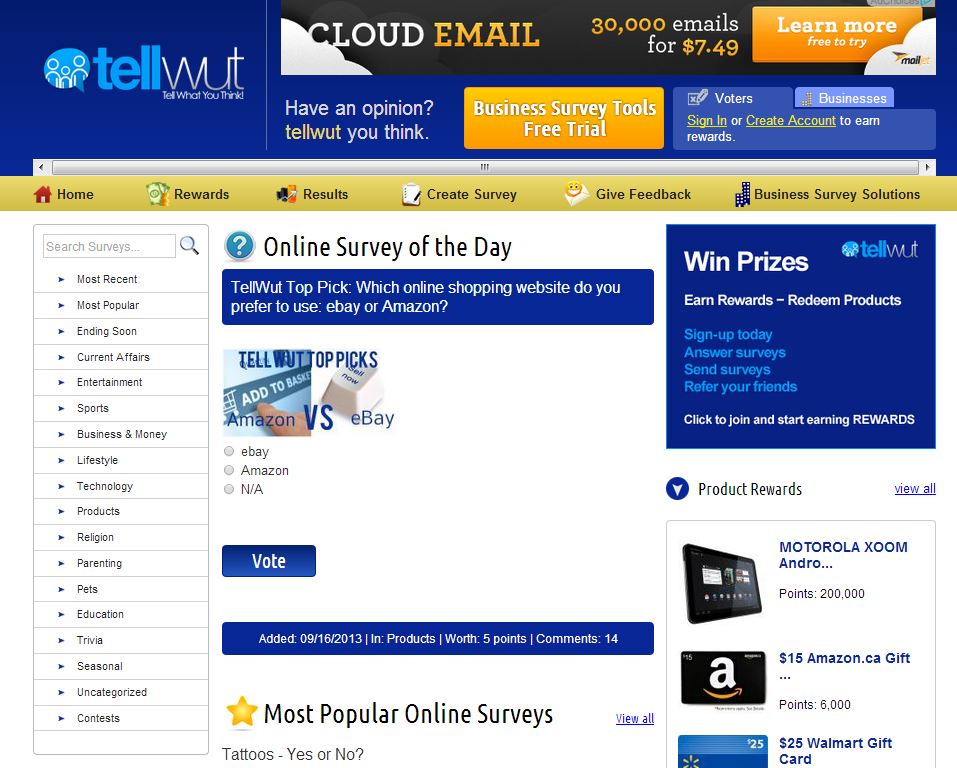 Tellwut is unique among the online paid survey research community for its emphasis on user engagement.

Signing up is an option available to all US and Canada residents who are 18 years or older.

Not only can users get paid and rewarded for filling out the surveys of other companies and members, but they can also receive rewards for crafting their own surveys (around 10-20 points).

The panel is used by both companies and individuals to “crowd source” information on a full spectrum of topics.
Some of the key features of Tellwut’s paneling system include:

Pros – The Pros Of Tellwut

Members can create their own surveys. The reward for creating an approved and complete survey ranges from 10-20 points.

However, the limit for ordinary members is posting up to 2 surveys weekly. Approved Survey Publishers on the other hand may post more.

Filling out polls is both fun and easy. Typically, filling out a poll takes no longer than 30 seconds and rewards members with 5-10 points.

Additionally, many new polls are available on the website daily.

Surveys are usually no longer than 10-15 minutes in length and reward users with more points (15-20 points or even more depending on the nature of the survey).

Some users have reported how they actively enjoy filling out surveys, especially considering how they can progress at their own pace – that is, the panel is low-commitment with users choosing how much or how little to answer.

Similarly, other users have commented how doing the surveys is intellectually stimulating and makes them learn about new things every day.

Users do not need to wait for email invitations to start taking up surveys. Instead, they can simply log into the website and start filling out surveys and polls right away.

There is no limit to the number of surveys and polls a user can take on a daily or weekly basis – which can mean the accumulation of a great deal of points over time which then translates to earning more rewarding gift cards and other prizes.

Additionally, Tellwut offers weekly contents for all of its members which can further increase the potential rewards.

Unlike most other online panels, Tellwut runs its own blog related to the online survey community and consumer opinions. Additionally, the panel also provides payment for any persons interested in contributing to the blog posts.

Another unique aspect of the website is the social networking element. Users can private message other members and start conversations with them.

Cons – The Cons Of Tellwut

Because the redemption is set at a relatively high 4000 points (equivalent to $10), it can take users quite a long time before they can actually cash out.

As most members are only casual users, it can take months before they accumulate the required cash amount – especially considering how each completed survey is usually worth only 5-10 points.

You need to participate in surveys on a daily basis and be persistent in filling out surveys and polls. A number of users have mentioned how they have had to toil hard just to earn the $10 redemption – one user wrote how it is barely enough to subsidize his internet bill.

Direct cash is not provided. PayPal or receipt of payment via debit/credit cards is not an option either.

Members can only redeem their rewards by selecting appropriate gift cards from retailers and other companies or choose from the website’s assorted merchandise list.

Quite a number of users have protested how their accounts have been unfairly suspended or outright banned from the panel and therefore, they are no longer entitled to the points they’ve accumulated.

The usual explanation reads that Tellwut will ban your account for very little reason and without informing you.

(If you want a survey site with great customer service and plenty of surveys, check out Swagbucks)

Additionally, others have reported how the accounts of their friends or those that they’ve recommended were cancelled for no apparent reasons too.

Second to the slow building up of points and redemption, this problem seems to be an alarming cause for concern as such comments by various ex-members can happen to anyone without prior notice.

Though members can participate on the panel’s surveys and polls however long they desire, for those who spend a good number of hours on the site daily, they are constantly exposed to the panel’s advertisements.

On any given page, a user can be expected to encounter at least 2 to 3 advertisements.

Only one member per household can sign up for a Tellwut account. This both limits the overall membership base as well as the potential earnings potential for a family or group. If two members are found to be of the same household, then both of their memberships will be revoked and forfeited.

Rewards are only redeemable for those residing in the US or Canada.

This means that people from outside the region will not be eligible to receive and redeem rewards for taking up surveys, filling out polls, etc.

Take a look at this quick video to learn a little more about signing up for Tellwut:

How do I redeem rewards?

Click the “Rewards” tab at the top of the page and you will see the selection of rewards that are available to you.

What are external surveys?

External surveys are not created by Tellwut, and come from a variety of different survey companies. You can find them on your “Available Surveys” page or in certain survey offers they email you. Administrators match them to your demographics as close as they can.

Why did my survey not get approved?

Your survey may not have been approved for a number of reasons. Someone could’ve already asked that question or something very similar. Unless you are an approved blogger, you have a limit of two surveys per week so you might have already reached your limit.

What are your support hours?

Tellwut’s support office is open from 9 am-5 pm EST/EDT Monday to Friday. If you write in during the week, they will most likely get back to you within 48 hours. If you write anywhere after 12 pm on Friday, there is a high chance you won’t hear a response until Monday.

Unlike most other online survey panels, Tellwut stands out for its user engagement and networking and communication capabilities.

The many user generated surveys together with the website’s own blog and private messaging system enables greater interaction and community bonding between members.

Despite its steep payout requirement of over 4000 points, lack of payment options apart from gift cards and even allegations by a host of users across various review sites about the suspension or cancellation of their accounts and the accounts of others, Tellwut’s reputation still remains buoyant.

Though recent ratings have shown a downward trend, Tellwut remains high on www.surveypolice.com’s listing of the top 172 online survey panels being ranked at #3 with over 4 stars out of 5 and a meta-rating of 77 out of 100 based on 233 user reviews.

The final judgement on Tellwut is that for all its limitations, Tellwut remains a good online survey panel for those who are interested in filling out current and interesting surveys and polls routinely.

Though the points per survey/poll are minimal, surveys are short and to the point – with users having the option to go as fast or as slow as they want.

This site is not a bad choice for adult residents of the United States and Canada.

However for anyone living outside the two countries, the best suggestion would be to look for alternative web panels that cater to your country or region – particularly ones that provide multiple means of payment including cash, PayPal and debit/credit cards rather than simple gift cards or merchandise. Swagbucks and MySurvey, the two best sites we have found, both offer PayPal payments as well as a variety of gift cards.